The Okanagan is well known for its stunning beauty, wide array of tourist attractions and locations, and often excellent weather. However, in recent years, it’s also starting to be known for something else: massive Kelowna developments.

Between tall skyscrapers and modern condos and townhomes, Kelowna has been a hive of activity for multi-family residential developers and roofing contractors.

Below are some of the notable developments that have been recently completed, are currently being completed, or are in the stages of preparation to be built soon.

Although it didn’t break any records for height when it was completed, the towering 20-storey, glass building quickly sold out and marked the beginning of the rapid change in Kelowna’s downtown skyline when construction started.

This multi-family residential skyscraper features 116 units each with its own view of Kelowna’s downtown. 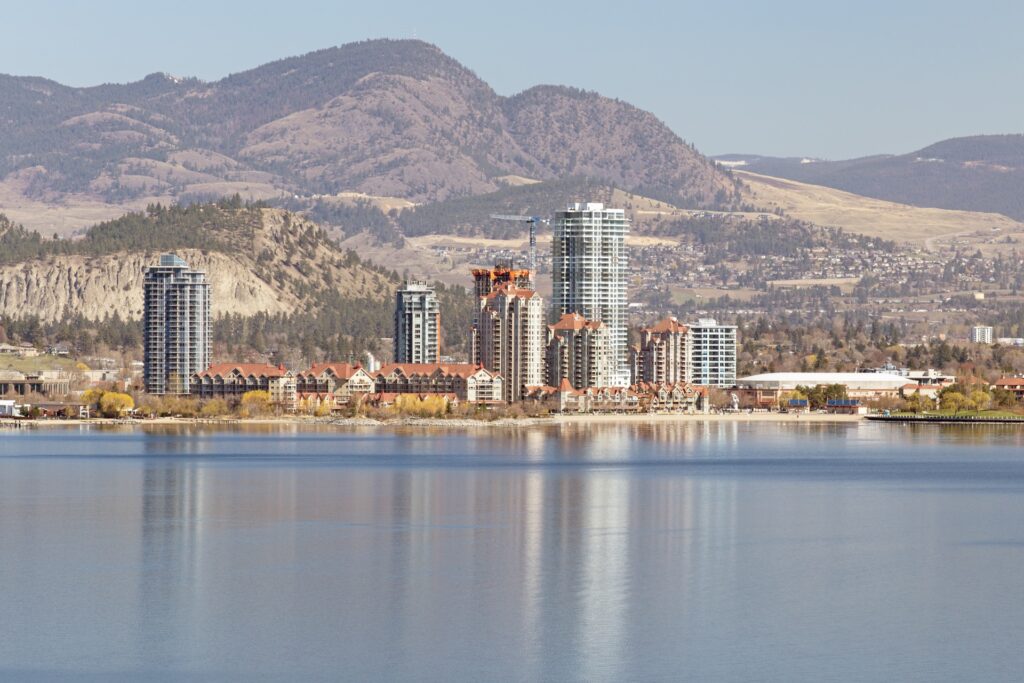 Soon to be Kelowna’s tallest building, One Water Street is one of the city’s most distinctive buildings featuring side-by-side residential skyscrapers. Although the second, smaller building (One Water Street East) is still largely under construction at the time of writing, the first and tallest tower is almost complete. In total, the complex will have 427 condo units.

This is a project we’re proud to be a part of, especially as one of Kelowna’s premier roofing companies. Unlike some of the other skyscrapers listed that used other contractors, we are a local, family-owned business that cares about top-quality craftsmanship in all our projects.

Although still under construction, the towering building is nearing competition in the core of Kelowna’s downtown. With construction starting soon after Ella’s construction began, it will have 178 units when it’s done.

Brooklyn Bernard Block features both 1-bedroom and 2-bedroom units that are designed to take advantage of the stunning views of downtown Kelowna and the waterfront.

While we’ve mentioned several of the notable projects either under construction or completed, there’s plenty still in the works for the future of Kelowna and the Okanagan as a whole with many Kelowna developments in the works. In fact, although the pandemic hampered many aspects of daily living, Kelowna has rapidly increased in development projects in the last 2 years.

One of the biggest changes expected to revamp an entire block of the downtown is Water Street by the Park. If fully approved, it will feature 3 skyscrapers. One of which will take the title from One Water Street as the tallest building in Kelowna and the BC Interior. It will also totally change a large section of Leon Street into a much more beautiful area and feature 650 units across the 3 buildings when done.

Another project to keep your eyes out for that will add to Kelowna’s skyline is Caban. This resort-style living, multi-family residential development will be right next to one of Kelowna’s most popular beaches: Boyce-Gyro Park.

Overall, there are a plethora of major and minor developments shaping both the Okanagan and Kelowna and there are still many more to come.

Need top-quality roofing done for your next development? Contact us today to learn more about what we can do for you!